Connect and share knowledge within a single location that is structured and easy to search.

What can we do site-wise to eliminate Winter Bash hats promoting Russian aggressor?

This year Winter Bash incudes balalaika and matrioshka, symbols of "Russian Federation", which Ukrainian Parliament has officially recognized as an Aggressor State and State Supporting Terrorism.

Also, Ukraine has condemned and banned any kind of promotion of Nazist and Muscovian aggressive regimes. Their symbols are illegal on the territory of Ukraine. 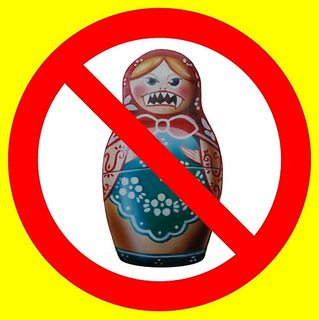 Although balalaika and matrioshka are not official Nazi/Commie symbols, they are clearly associated with Aggressor State, along with official ones, promoting state-sponsor of world terrorism, legitimizing its aggressive ideology and its imperialistic expansionism.

Question: What can be done to exclude terrorist symbols — either globally on Stack Exchange or on Ukrainian Language.SE site?

If you have a customizable ad blocker like uBlock, you can add rules to filter them out:

(copied from my answer here)

This blocks the images (also for users who are wearing these hats): 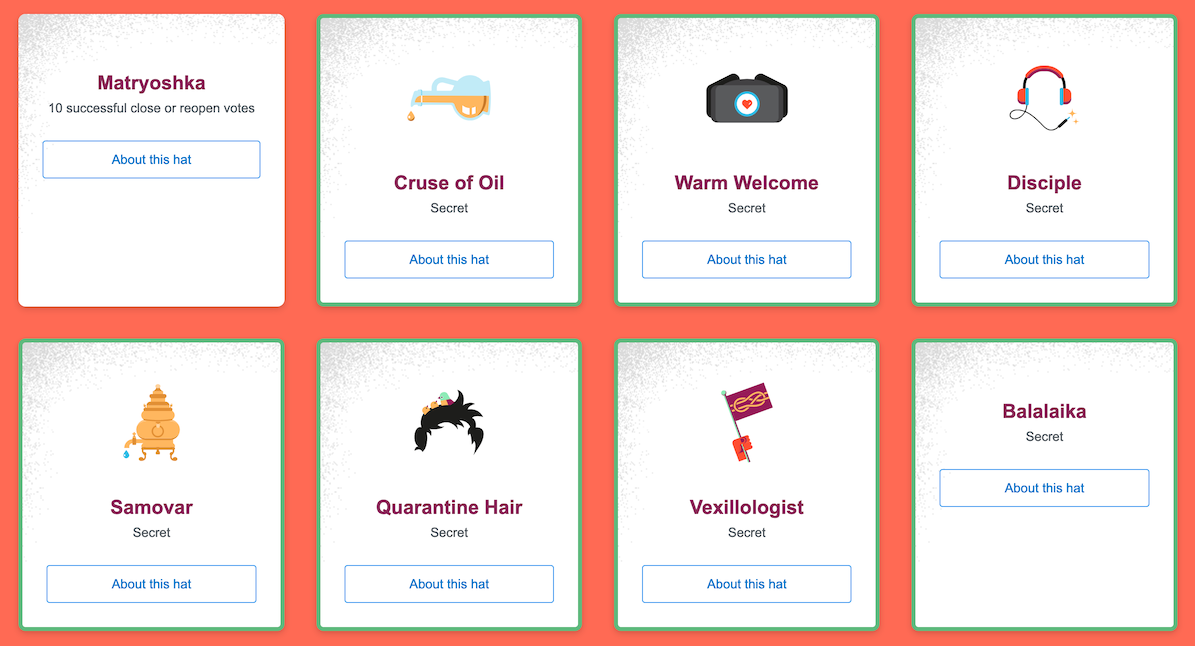 You can probably tweak the filter to remove/hide them entirely from the Winter Bash 2020 homepage if you want.

About matrioshka and balalaika

Matrioshka and balalaika are neither symbols of Russian militaries nor the symbols of current Russian regime. They are just elements of Russian culture. I don't think we should overreact them.

At least, in that way they're perceived by the most of the world. (Some even (I suppose, wrongly) assume matryoshka to be a positive symbol of the whole East European and/or Slavic culture — this is probably wrong, but, I suppose, many in Western countries think in that way and we can't make them change their opinions instantly.)

While, due to the events of the recent years, many Ukrainians feel angry/sad when seeing/hearing anything related to Russians — but this, to be honest, is not constructive. For WWII we blame Nazis, not Germans. Similarly, I think, for the recent events we should blame specific regime/politicians, not all Russians.

However, for the second, I see technical and other obstacles:

Never-the-less, if common opinion on UkrSE would be “to write”, then I will write.

We understand that these symbols (matrioshka and balalaika) aren't evil per se, but, against the backdrop of recent history events, they may be perceived quite negatively by significant part of Ukrainian community.

From logical point of view it may be quite irrational, but people are not 100%-logical, they have feelings, and we should respect the feelings of our visitors.

We don't plea for StackExchange-wide changes but only for changes that would be local for Ukrainian Language SE. Is it possible:

(I actually am afraid we can get more negative effect than positive — i.e. that it will cause paying attention to our low popularity rather than Winter Bash changes — but if community thinks we should submit it, I will.)

Upd. This answer got 1 upvote, 0 downvotes and 0 comments. The question itself, despite being “featured”, got 2 upvotes and 1 downvote. So it looks like either there's really not many people here, or people here don't really care about this matter — in either case, IMHO, it makes not much sense to write a plea to the Stack Exchange. (And the most upvoted answer here is about personal (not site-wide) adjustments.) I don't give up my words, if I see a public demand on this topic, I'll submit a plea, but I don't see it.

Upd 2. After watching how Winter Bash goes, I think this topic is overreaction. Stack Exchange isn't focused specifically on the Russian symbols (as one may thought), it contains plenty of (public and secret) hats referring to cultures of various nations (e.g. Hanafuda, Kitsune, Wa-boushi (Japanese), Bûche de Noël (French), Milliner (originally Italian), etc); and, besides that, as I've said before, aforementioned Russian hats are just elements of Russian culture, not symbols of Russian militaries and/or of specific regime.

Not the answer you're looking for? Browse other questions tagged discussion winter-bash .

Welcome!
This site is for discussion about Ukrainian Language Stack Exchange. You must have an account there to participate.
Help
Visit chat

6
Наша політика щодо посилань на піратський контент? / Our policy about links to a pirated content?
1
Can we broaden the scope of the site beyond linguists, teachers, and students?
1
How our announcement for the new users should look like? Яким має бути наш анонс для новачків?
5
What topics can I ask about here? – Our custom help page
1
How can we convince the Moderators to do their job of cleaning the low-quality content?